I have been hard at work lately. Not only have I been hard at work writing new content for In the Limelight, I have also given it it’s most dramatic face-lift ever, and fine tuned other elements of the site that you may or may not have noticed.

However, by far the most difficult project has been my recent decision to remove several articles from this website.

Letting go was difficult. But it had to be done.

When first started this blog, I had no idea what it was going to become. It had no direction, is was just for fun. In the very earliest days, I wrote about anything that came to mind, and created the various categories to fit what I wrote, not the other way around. Without a clearly defined purpose, early articles covered everything from technology to politics. In addition the quality of these early posts was often inferior, most of them were too short, and my tone was not consistent with what I want to present on In The Limelight today. It was very much a personal blog that over a fairly short period of time settled into the theme of personal development.

Many time over the years I have been tempted to remove some of the older articles, but could never quite come to terms with the decision, not was I sure what to do with the articles I am would be removing. Should I just delete them? Move them to another blog?

But I recently I read an article on Traffic Generation Cafe that described how having low quality pages on your site could in fact drag the entire site down in Google’s eyes. With this in mind it was no longer just a question of keeping the site on topic, leaving those articles the way they were could actually be hurting the site at the search engine level.

The question of how

With the decision made to purge the off topic and low quality content from In The Limelight, I had to finally give some serious thought to how I was going to do it. I had several considerations:

What I did to clean it up

Eventually I decided that the first step would be to delete the categories that were related the content I wanted to purge. This left me with a list of post that were now un-categorized. I was no able to easily see a list of potential victims for my great purge of 2011. I discovered that these posts largely fit into three groups:

Being true to purpose versus preserving the historical record

In The Limelight has for a long time now had a very clearly defined purpose; to teach and encourage people to be the creators of their own life. More recently, this mission was summed up with the slogan: Create. Live. Inspire.

Create the life you want. Live it to the fullest, and Inspire others to do the same.

It was critical that all of the posts on In The Limelight related to this mission statement.

I, in a very difficult decision, completely pulled the plug on everything from group 1, those articles which were clearly off topic. It was hard because I had written about things that I did care about, and also topics others apparently cared about as a couple of these were some of my more popular articles in terms of comments and search engine traffic.

They were however not appropriate for In The Limelight at all, being focused on politics, or tech, or commentary on (then) current events not at all related to personal development.

So they are gone, forever. I didn’t even save them on my computer, and in the end it actually felt good to let go.

The second group was much more difficult to deal with, so I decided to move them all into a new category called “Historical”. I ended up deciding to move the third group to this category as well. Here’s why:

These posts do have value to my readers, and they have value to me, but they need work. They were written at a time before In The Limelight transitioned from a personal blog to what it is today. Therefore the plan for these posts is not to delete them, but instead to revise and update them to bring them up the standards I require. Some of them may be rewritten entirely, some may be combined, and others may simply be given new introductions to add value and give them context. We shall see.

It’s not just older articles that have been effected. I also used this opportunity to check though many of the more current articles, and in many cases I made some changes, nothing major, just an edit here or there for clarity, or to alter the tone to ensure it promotes the positive message of In The Limelight as much as possible.

What do you think? 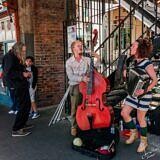