You may have heard that Donald Trump is literally Hitler. Of course, in the parlance of our times, literally literally means figuratively. Words don’t mean what they mean anymore, they mean whatever the barely literate liberal arts gender studies major with filthy rich parents who’s lecturing you about your “privilege” wants them to mean. Up is down, down is up. Up-up-down-down-left-right-left-right-b-a-start will leave most people scratching their heads (but try typing it right now if you need some comic relief). Far-left “anti-fascist” extremists are liberals, liberals are conservatives, and conservatives are, well, literally Hitler. Not only is this heinously disrespectful to Hitler’s victims, it’s also just plain insane. 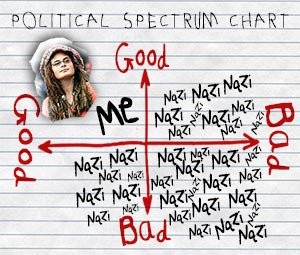 We are living in a batshit crazy time.

University students hold protests against free speech and liberty. Universities themselves have become safe space daycare centres for overgrown babies prone to tantrums when they don’t get their way.

Using the wrong pronouns is a crime, but Christians can’t choose who they bake cakes for.

We’ve gone from ending the “stigma” around mental illness to actively celebrating it. Did you succumb to mental illness? That’s stunning and brave! What’s your diagnosis? Put it in your social media profile!

People’s lives are routinely ruined for having wrong opinions™, and it doesn’t matter who they are; famous scientists, CEOs, or just an Average Joe like me. We’re all equally vulnerable to the wrath of the politically correct totalitarians that have all the klout these days.

The leaders of our nations are more interested in virtue signalling to the world how tolerant and “progressive” they are than doing their duty to serve and protect their citizens’ interests.

Weak-minded people engage in choreographed protests against capitalism, “conservatives” or just “white people”, funded by a billionaire misanthrope who helped the Nazis. Apparently they don’t understand irony. These groups pop up out of nowhere and then fizzle out just as quickly once their purpose has been served.

The biggest purveyor of fake news is the mainstream media, a behemoth twisted and ruined by decades of mergers and acquisitions, now fully controlled by a handful of billionaires but masquerading as a free and independent press. Then, like all sociopaths do, they DARVO the crap out of their opposition.

The internet is under attack. Once free, decentralized and open, it’s now firmly in the grip of just two companies; Google and Facebook, who have become the gatekeepers of basically everything. And their power and influence grows every day. (Anti)social media is literally (not figuratively) the worst thing to happen to humanity. Worse, control of the domain name system was handed over the to UN. If you think the UN is looking out for the good of the world, you probably think having Saudi Arabia on the human rights council is totally reasonable too.

Most people have lost the ability to think for themselves and analyze information (if they ever had it). They just accept whatever Buzzfeed or CBC tells them and have feelings about it but never thoughts. Don’t believe me? Next time someone expresses a strong emotional opinion about something like, “Donald Trump is a racist!”, ask them what evidence they’ve seen that led them to that conclusion. If you’re lucky you’ll get a blank stare, if you’re not, you’ll be accused of harassment.

Oh, and in case you think it’s an accident that everyone is tossing these accusations around, think again. It’s a narrative that’s been carefully crafted by the usual suspects.

Read up on Saul Alinsky.

People are being manipulated on a grand scale. Two years ago, Donald Trump was a cultural icon, the eccentric billionaire real estate mogul turned entertainer. The very worst anyone (except Rosie O’Donnell) felt about him was indifference. Overnight he was turned into enemy number one by a media machine doing the bidding of its masters. By some miracle, he still won (yes, he really did. By the way, did you know Lincoln only won 40% of the popular vote?). And no, the miracle wasn’t the fucking Russians.

I like Trump. As a rational, reasonable person I will change my mind if he ever gives me a reason to. I am not partisan. I’ve voted for the Liberal Party, the Conservative Party, and even the NDP (just once, in a weak moment). If I was American, I would have voted for Obama in 2008 AND 2012. In 2013 I would have been regretting my mistake.

I also don’t care if you don’t like Trump. I just wish you could articulate why in terms that don’t involve repeating hysterical nonsense and your very own alternative facts.

By the way, anyone who compares you to Hitler because they disagree with you and want you to shut up is literally* Stalin. Also, Donald Trump is clearly not even figuratively Hitler.

And that leaves me feeling a bit lost and isolated. But more on that in a minute.

Over the past half decade I have seen a lot of blessings, not the least of which is my wife and the life we have together. We are fortunate to have a nice home to live in (even we can’t afford to own one in this city), and two adorable and supremely intelligent cat-children (who are even toilet trained to we don’t have to clean litter boxes!) to keep us company. We are far from rich, but we are financially stable enough that we don’t really worry about money. We are able to take modest and occasionally not so modest vacations when we want to. It’s not a glamorous life, but it’s a good one.

On the other hand, I have seen some major challenges. I had a bad car accident and the resulting lawsuit dragged on for years before I got a settlement. I had a battle with testicular cancer and had to endure chemotherapy. Which has (so far) cured my cancer but left me with nerve damage, reduced lung capacity and constant fatigue. Shortly after finishing chemo, I had a terrible bicycle accident involving a pedestrian that, while leaving my only mildly disfigured, was emotionally devastating, and I haven’t been able to get on or even look at a bicycle since. And then, just when things were settling down, a dentist who was in a rush and being sloppy caused permanent nerve damage with the needle, leaving me with chronic pain and discomfort in my mouth.

I wish I could say that I took all of that in stride and turned it into a positive. That’s what I wanted to do. That’s what I intended to do. But I didn’t. My wife tells me all the time how strong I was during my cancer treatment and how proud she was of me. But I really wasn’t. I was just internalizing my fear and worry and displaying stoicism that I did not feel.

If you internalize your emotions they will turn into anger, no matter what they start out as. That’s what happened to me. Far from emerging from my struggles as a stronger, better man ready to take on the world. I emerged as a timid, uncertain man, took a boring, but good, job and gradually became angrier and angrier. Maybe it wasn’t my fault, maybe I just had too many traumatic events in a short space of time. Heck, it definitely wasn’t totally my fault, there’s a lot of really sinister crap going on in the world these days and if you’re not at least a little bit angry about it you either have no soul or you’ve somehow found a way to live in blissful ignorance. It doesn’t matter. I regret it.

I think I’ve told this story before, but I’ll tell it again. Several years ago when I was in perfect health and couldn’t have even imagined having cancer, I was riding the bus. I don’t remember why but I was feeling particularly anti-social that evening. I had the seat right across from the back door all to myself and I was hoping to keep it that way. So when an old man got on and made a beeline to the seat next to me I wasn’t thrilled. When he started talking to me I was even less thrilled. He told me stories about his life, how much he liked to cook, how independent he was in his 90s. He started to win me over. Then, out of nowhere, he said, “do you know what cancer is?”. I think I probably just gave him a quizzical look because he continued, “cancer is what happens to people who didn’t do what they wanted with their lives and got angry about it.”

I will never forgot that moment. Now obviously it’s not exactly accurate. Nevertheless, the connection between mind, body and spirit is very real. The fact is, it doesn’t even matter. Anger *will* give you cancer, whether physical cancer or just a cancer in your mind.

I should have been true to myself. I should have committed to my creativity years ago. I’m easily distracted. C’est la vie.

So that brings me back to feeling lost and isolated.

When I first came to the realization that I needed to cut out the negativity in my life, I started with Twitter because that’s where I sourced most of it from. I un-followed everyone political and started following only other photographers, travellers and creatives.

And that’s where I ran into trouble. In between posting beautiful photos or discussing cameras, or visits to far away places, I got to see angry, often hateful political statements. Usually directed at people like me. It was worse than what I was trying to get away from.

I guess I shouldn’t be surprised. The creative world has always leaned left. But it certainly seems like they used to be more  welcoming of diversity that went beyond superficial and unimporant bullshit like skin colour or sexual preference. And they used to be nice. You might even say tolerant.

But these days you had better not be “conservative” if you’re involved in the creative world, and if you are you had better get damned good at hiding it or you may quickly find you’ve become persona non grata.

But I’ve got to be true to myself.

I suspect there are more people like me out there. I just wish I could find them.