The photos that illustrate this post are bad. I’ll explain exactly why at the end.

It’s no secret that film photography is experiencing a resurgence over the past few years.

It’s moved beyond just the hipster “Lomographer” crowd, more and more photographers are rediscovering film or, in some cases, discovering it for the first time.

Cinema, too, is returning to film. What do The Girl on the Train and Star Wars: The Force Awakens have in common? They were both shot on film.

We’re even at the point where Kodak is putting old films back into production, and even releasing new a new Super 8 movie camera. No, film will never be as big as it once was, but it does seem that it will continue to coexist with digital to a degree that few would have predicted just a few years ago.

Digital cameras are indisputably technically better than any film ever made. Digital offers better colour, better resolution, and better low-light performance (this one is not even close), and yes, even better dynamic range. Anyone who says otherwise is simply misinformed or betraying an emotional bias (exactly like people who have convinced themselves that vinyl records are better than more modern tech – they aren’t). So why would anyone want to mess around with film these days?

The majority of the new film community fall into two categories. Young people, early twenty-somethings, who grew up after film was already “dead”. They don’t necessarily think film is better, they just think it’s cool (like vinyl records). Then there are the older people who are nostalgic for the good ol’ days. For them, film is just better. Like vinyl records.

But what about me? Why did I want to experiment with film?

First of all, it wasn’t for any of the usual reasons people give. I didn’t need to be forced to “slow down”. I’ve always been a slow, methodical shooter, even with digital I take very few frames. I didn’t need to stop relying on my LCD. I rarely review anything until I’m home. I don’t buy into any silly arguments about film being more archival; seriously, are you really convinced storing a bunch of organic, biodegradable negatives is easier or more permanent than storing digital images on ever cheaper, smaller and denser digital storage?

I grew up when film was still king, but I rarely got to use it because as a kid I couldn’t afford a good camera, much less film or processing. I had a few toy cameras, and I borrowed a piece of crap 35mm compact made by Vivitar to take across Canada. But, sadly, most of the pictures I took remained undeveloped. And by the time I could afford the 35mm SLRs I had always lusted after, digital was firmly in charge.

So for me, experimenting with film is essentially about exploring what I missed out on. But here are a few specific reasons I find film interesting:

Modern digital cameras create accurate images, and a lot of people get really, really obsessed with accuracy. Personally, I hate “accuracy” (except in relation to printing), and that’s why I spend time in Photoshop massaging the RAW files until they look just the way I like them.

But there’s a large contingent of (bad) photographers on the internet who get really excited about boring, accurate images. They tend to be more than a bit hostile towards photographers who edit their photos.

What these people don’t realize is that colour accuracy in photography was fairly rare until recently. Few colour negative films are/were anything close to accurate, and essentially no slide films were. And even the most accurate films were dependent on the temperature of the lighting being exactly matched to the film. The same film will produce wildly different colours on cloudy day versus a sunny day, or if used indoors. And none if this even takes into account the variables introduced through wet printing or even scanning.

Every film stock has its own unique look baked right in. The colours, the grain, the contrast, they are inherent characteristics of that particular film. If you look through old family albums, browse pre-digital National Geographics, or watch old movies (before digital editing and colour correction became common), you’ll notice that the colours are never accurate, and that’s what makes them so pleasing. There’s a reason why Instagram style filters and presets have become so popular: digital, by default, is often a bit sterile. If you know what you’re doing, you can create these looks with digital, but with film it’s already done. Not having options can be liberating.

The gear is cheap yet priceless

I purchased a used mid-80s Canon (which I will detail in a future post) with two lenses for less than $60. And all of it was in mint condition. I kid you not, it was basically brand new gear.

The bonus is that pretty much every camera lens ever made can be used on my mirror-less cameras with simple and cheap adapters.

Another fun thing happens after people hear you’ve started using film cameras again: they start giving you old cameras that they think are worthless. Some of them are, but sometimes you get some really great stuff.

When I decided to explore film, I was determined I would do it all from start to finish. That is to say, I was going to develop it myself. The only thing I wasn’t interested in is making wet prints, digital prints are better, and I have no space for or interest in having a darkroom.

So gathering up all the materials to develop my own film was exciting. Actually doing it for the first time and having it work was a thrill.

I have a pretty solid routine with digital. I have a certain way I like my photos to look, and I know how my RAW files will behave and what I can do with them. With film I don’t have that. I don’t just get to learn something new with each roll, I have no choice.

Why I am not giving up digital any time soon:

So am I going to give up digital and become a “film photographer”? Am I doing to start using film for my “personal work”.

Hell no! I love my compact digital mirror-less cameras and my tack sharp modern lenses, and there’s no way I am ever giving them up.

Film is expensive, and can be a pain in the butt. I’ve read some silly arguments that film is cheaper because digital cameras cost more up front. Compared to what? A decades old second-hand film camera? If you factor in the cost of development, scanning or even just chemicals if you do it yourself, it’s not even close. Film takes up way more space than memory cards, and because I can’t change ISO or white balance on the fly, I’ve found myself “wasting” the last few shots on a roll because I want to change films.

Then there was the problem of getting the images into the computer. Outsourcing scanning is expensive and it just wouldn’t be satisfying to me to give up control over the process like that. But I can’t really justify the cost of a film scanner so I’m stuck “scanning” with my digital camera which is tedious at best. The results are okay, but to get truly good results I’d need to invest in some extra equipment, at which point I might as well by a scanner.

Which bring me back to the beginning: why are the photos in this post so lousy?

Well, to be honest, I kind of like them. As pictures of mundane objects shot on cheap ISO 100 film that I accidentally shot at ISO 800, push processed myself in my bathroom, “scanned” with my digital camera and a half-assed, DIY lightbox, and then converted to black and white to hide the nasty colour shifts from pushing the film beyond its limits, I think they are kind of interesting.

And making them was just fun. 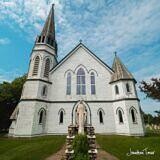