The expression, “just follow your heart”, get thrown around an awful lot. It’s the kind of advice people give to others, and to themselves when they can’t think of something better to say. And it’s feel good advice, as opposed to say, “stop for a moment and think about the pros and cons so that you can make an informed decision”.

The problem with following your heart comes when the hearts wants something that conflicts with what the rest of you wants. For instance, all of my life my heart has desired to be creative and be involved in the arts, which directly conflicts with my desire to have a strong, stable income stream and live a comfortable or even luxurious lifestyle. Unless I get lucky and achieve some level of celebrity, it is unlikely I can have both without compromising.

On the other hand, ignoring your heart and making decisions based solely on the practical considerations of your brain is not necessarily the best choice either. And personal example from my own life is my decision to attend broadcasting school. Though I do not regret my decision, I must admit in hindsight I made it for all of the wrong reasons. I did not go because I was truly passionate about broadcasting, thought I did have a strong interest, I went because my brain told me and was a more practical, smart choice, that theatre school. I thought broadcasting could be a good “day job” for an actor. I was wrong, and this may explain why I have not found success in the broadcasting industry.

Recently I have chosen to follow my heart and get back to my real passion, acting. A curious thing happens when you make a decision that truly resonates with you. Things start falling into place. Several months ago I was ready to sign with a small agency based in the suburbs. Another actor I know told me she thought that would be a mistake. Her opinion was that I should hold out for a bigger agency with more “pull”, as she thought I was beyond what I small, relatively new agency could do for me. She then went on to suggest a list of three specific agencies I should target, with one in particular that she thought would be a good choice. I took her advice and decided to wait.

Now here is where it gets interesting. About a week later I was hard at work making coffee (I work in a coffee shop, at least for now) and a lady came in and as I was making her drink she made a comment about being tired and not wanting to go back to work. I asked her where she worked, and she says, “I am a talent agent, I own _____ Talent”. Well it just so happened that was the exact agency that my actor friend had told me I should try to get into. To make a long story short she ended up asking me to drop an audition DVD off at her office.

Get the latest posts by email, plus exclusive content, offers, and free stuff just for subscribers.

It took me more than a month to get myself organized and prepare that audition DVD, and during that time she did not come into the coffee shop even once. I was a little concerned that she would have forgotten about me or no longer be interested, but nevertheless I packed up my resume, photo and the DVD and took it to work with me just the other day, with the intention of stopping by the agency to drop it off on my way home from work. Well wouldn’t you know it on this particular day she finally came back in, and what did she say? She said, “So are you ever going to drop off that resume for me?”

Coincidence? Perhaps, but that’s two coincidences in a row that resulted from me letting my heart guide me.

It doesn’t stop there, just the other day I was auditioning for a play. The audition location turned out to me in a very sketchy part of town. My brain started taking over, it wanted me to ditch the audition. It was saying, “Crap dude, do you really want to have to come down here to rehearse a play several nights a week? They could be weirdos you’re auditioning for”

I almost listened and bailed, but then I realized that this was a non-profit theatre group and this was probably the only place they could afford the rent. I followed my heart went inside, had one of the best auditions of my life, and even had a fun. And then just tonight I was walking home from work and stopped to grab a shawarma for dinner. As I was waiting for my food, who should wander by, but the director of that play, and he had some pretty encouraging things to say. In a city of two million people, it’s another interesting coincidence…

All in all, I think your brain is far more likely to lead you astray than your heart. I’m not saying you should stop thinking, but learn to keep those thoughts in check. It’s easy to let your brain take over your life to the point where you spend all of your time thinking, but never doing. If you follow your heart, trust your gut, things have a way of working out, and usually for the better. 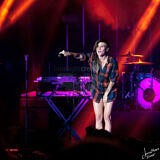